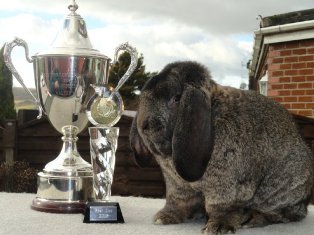 Borage did well for

himself as an U/5

Best in Show at the

Tarragon has developed into a very handsome young man. At the Bradford Champs 5* Show 2019. He was Best Steel, Runner up Best of Breed French Lop.  Also  Runner up Best Lop, in The International Stakes.

This young Man was completely Black when he was born. Dam Rossendale's Ariandi, Sire Rossendale's Supreme Champion Armstrong Proton started to get his Steel markings as he developed. To date he still is very Dark on his Back, we are hoping has he matures in to an Adult he will  Steel up all over. some judges do like them very Dark, so like them slightly lighter. He did go Bob in the young SS in the YLC Young SS. We have had him out & about has a young Adult. with mixed comments.

Panamara did very well as a youngster his best achievement was Best U/5 Lop at Emley Agricultural Show. He went on to  win the overall U/5 Grand Challenge & was placed 3rd in the Any Age Grand Challenge next to his Cousin Troy.

What a year this lad has had, he managed 8 Best in Shows up & down the country. I think I am right  in saying this is the most Best in shows with a French lop in such a short period of time.

He is just starting to come back into coat after a good moult so we will see how he goes.

Troy is litter brother to Jet

Runner up Best in Show

These two Brothers are both out standing Bucks. Both of them took a while to clear there baby coat. Jet did go out has an U/5 a couple of times. Troy wasn't able to. but he has made up for it since.

At The Northumberland County Show late May. Jet went best of Breed Runner up Best Adult Lop. In the northern Lop Stock Show Troy was best of breed but didn't get any where in the Challenge.

But a couple of weeks later a completely different story &  Troy has done us proud.

Both  these boys go back to Supreme Champion Graphite lines 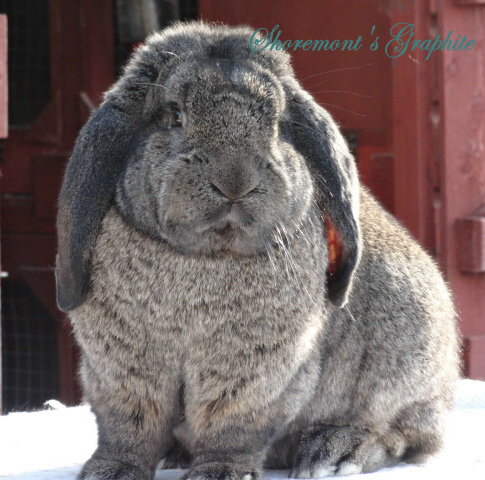 We  are very pleased with this young man. we took him to The  London Champs Show October 2011. He won his class & was runner up Best French Lop & 4th The U/5 Lop Challenge.

He went to Hurworth in the September where he got Best of Breed in the Northern Lop SS.

Graphite suffered a very bad moult in 2012. we weren't able to take him out for 12 months, his 1st trip was to the West Midland Champs Show in August 2012. He went Best of breed in NFDLC & was 3rd in the overall Challenge.

Well it was well worth the wait he did us proud . He excelled all our wildest dreams, going Best Lop out of 200 +Including some of the best Rabbits in the country & also some from abroad.

Pictured here on NFDLC Stand Thanks to Hazel Elliot

Tiatanium is son of our Double Champion Zodiac. Although Zodiac is Blue masked Steel. He is still very use full to us,adding fantastic type to our Steel lines.

Titanium went to Grantham as an U/5April 2012 he went Best of Breed,Best Lop, Runner up Best in Show from an entry of 165.

We have now had him out & about on the circuit he as already achieved several Best of Breeds & placed in the Challenges just like his dad before him.

Titanium is now retired with Alma